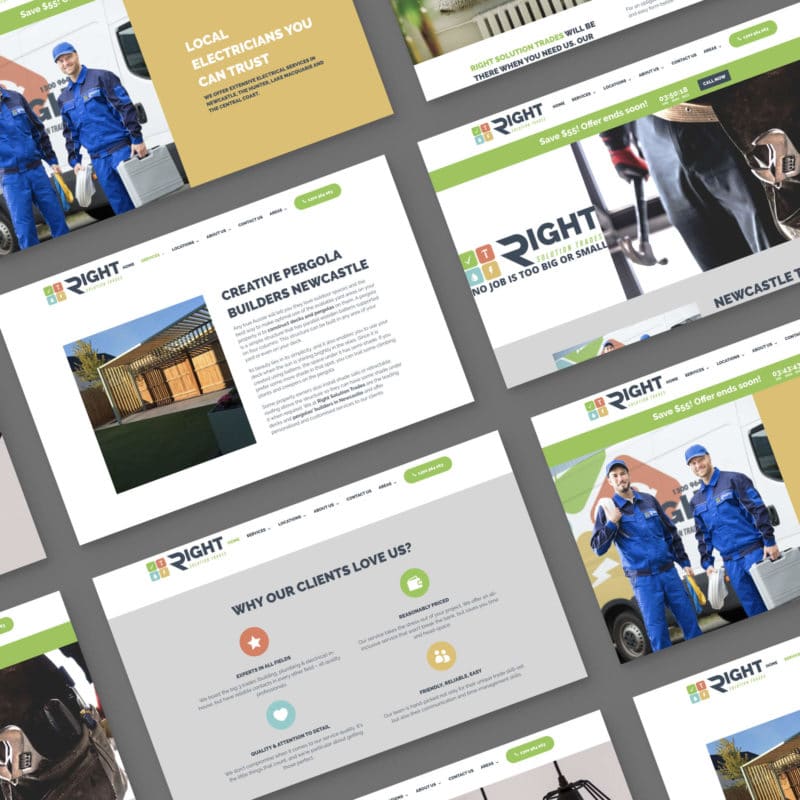 Right Solution Trades is a medium-sized multi-trade business covering all things building, electrical & plumbing. We were engaged to minimise marketing costs by building an organic brand that wasn’t so reliant on lead generation advertising, which is where the brand was previously seeing traffic from exclusively. Our focus was to change the perception of the business, so that it was no longer “just another trade company”, but a brand that represented top-tier quality of service, professional and reliable tradespeople and responsive services. The only way to do this was to take a comprehensive multi-channel approach. 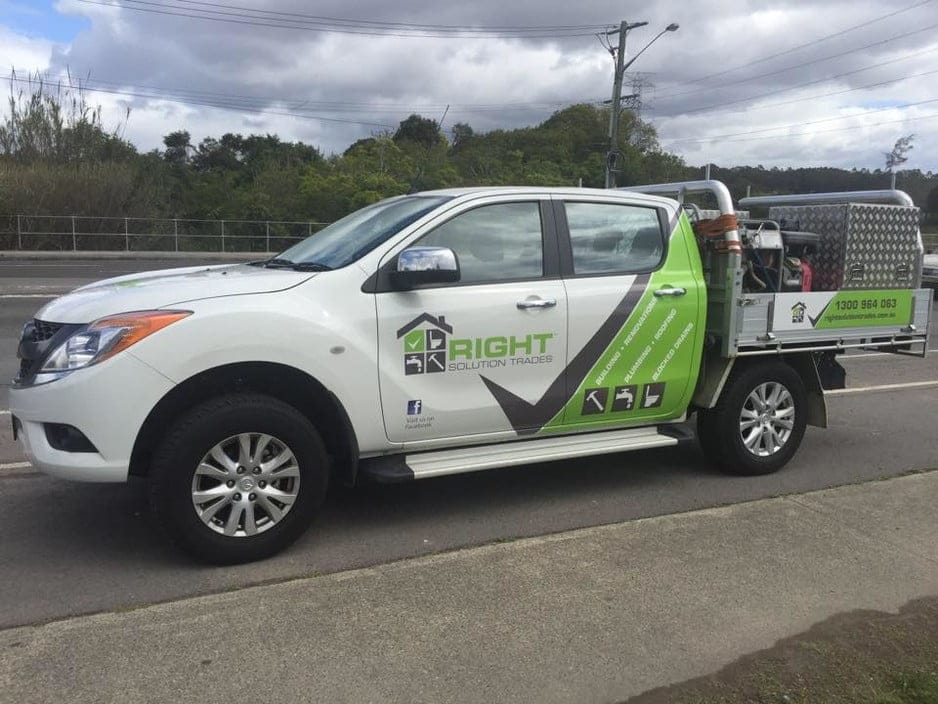 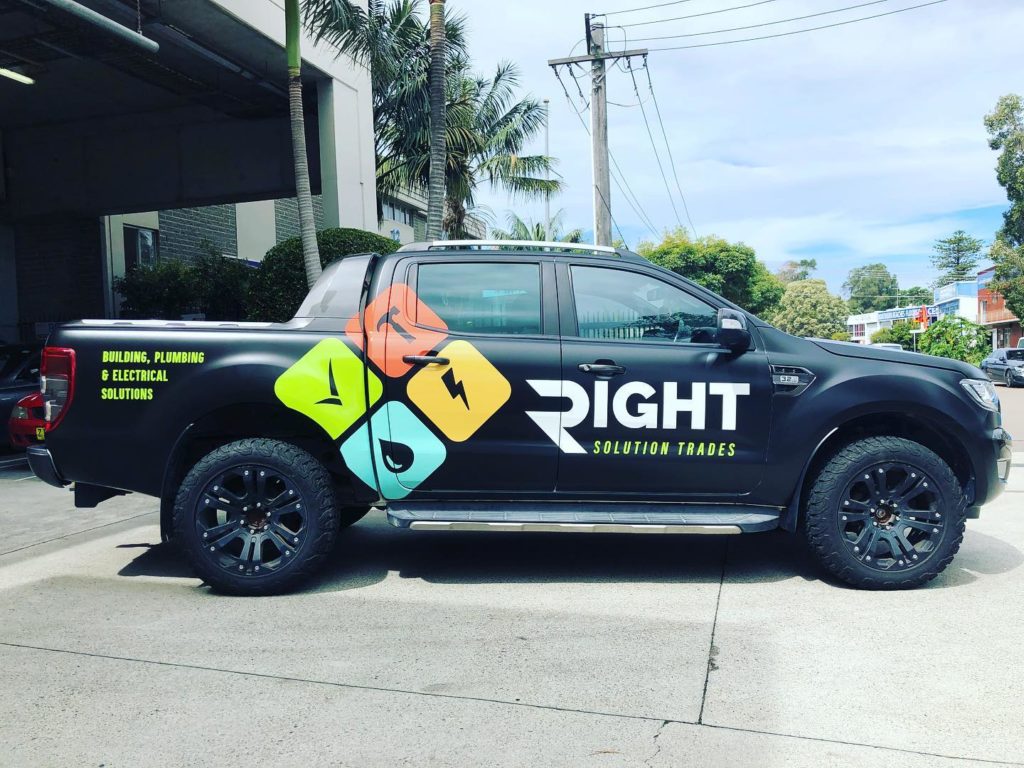 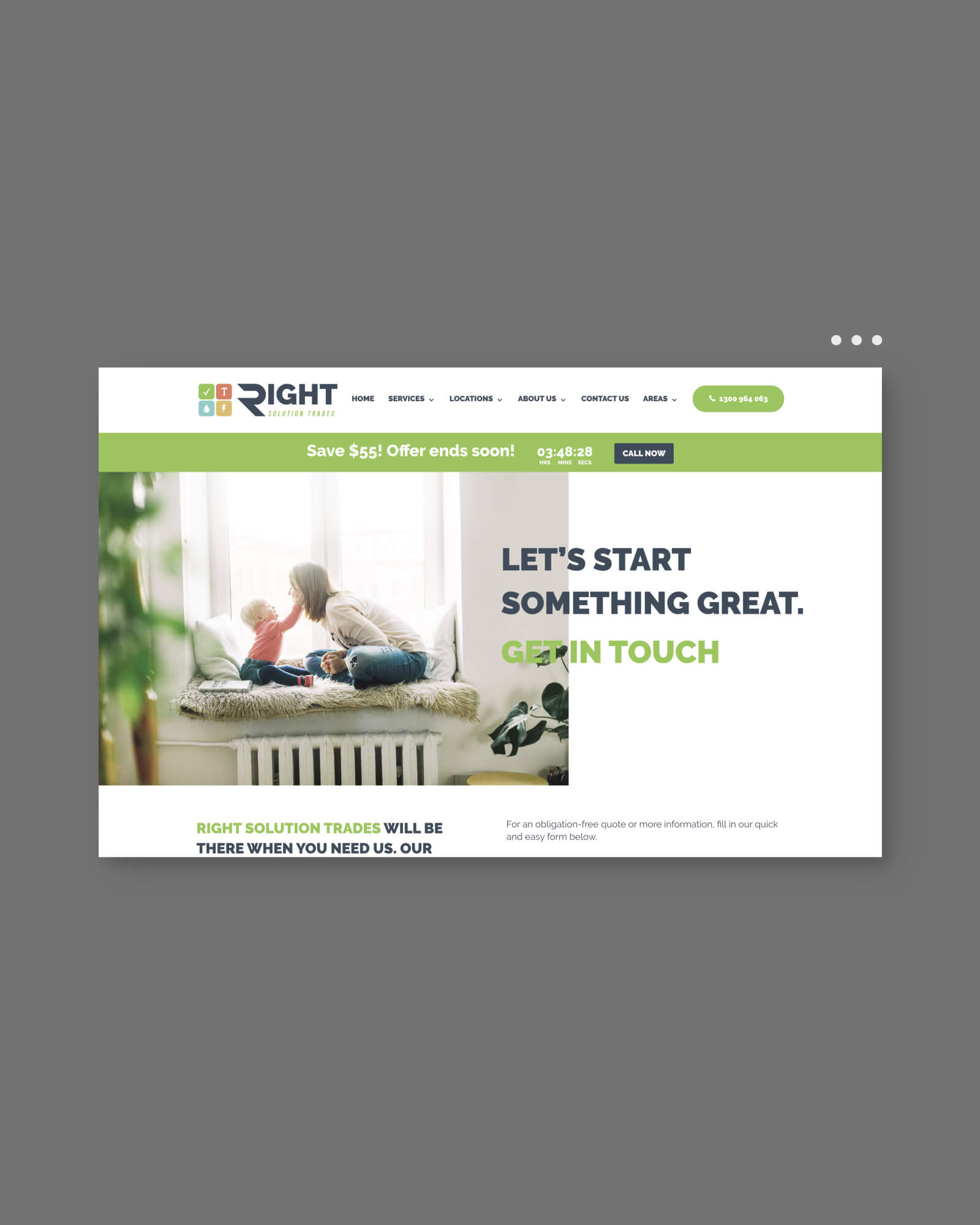 The first step was to cover the foundational branding and strategy piece. We needed to assess where the brand was now, what competitors were doing and what opportunities existed. The visual identity of the brand was tired and cheap-looking, which ran against their ethos. An exhaustive redesign of all assets was our first move, coming up with something that lent from the original brand, but introduced a freshness and series of colours to be used across the individual services/industries covered. A softer brand that didn’t feel over-masculine, but instead inclusive and accessible, was the result – one that was ready to begin marketing once again.

Our ongoing engagement was then to expand the single-channel (Pay Per Click – PPC) approach, which was high risk and expensive, and spread it over organic, PPC and social channels to ensure there were multiple touchpoints (interactions and engagements) and a diverse marketing landscape. 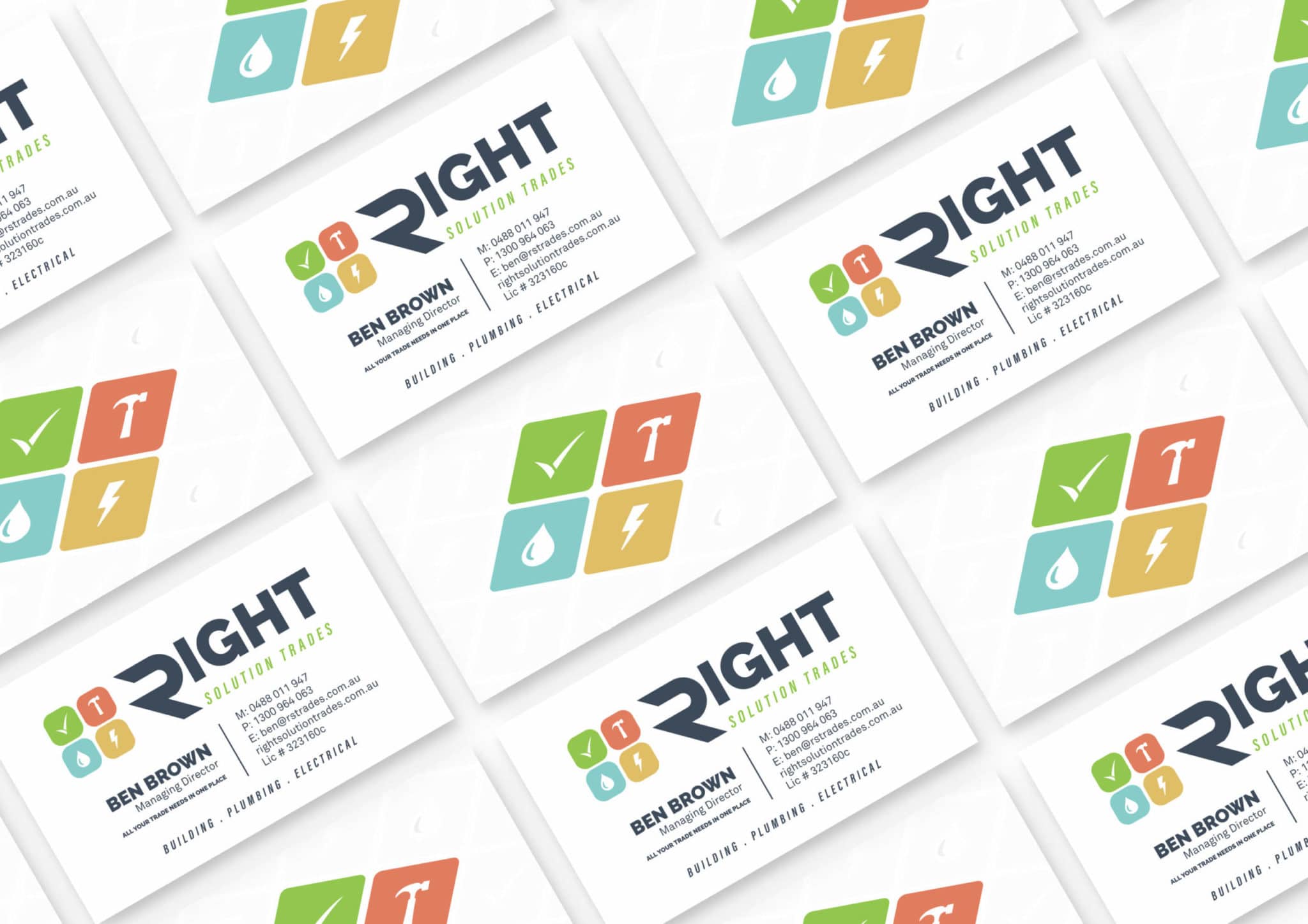 Trade is a saturated market here on The Central Coast, and most local businesses also want to target the neighbouring cities of Newcastle and Sydney, which are even more so. Right Solution Trades understandably had a Central Coast budget, competing with players that had city marketing budgets (which are markedly higher). This meant that we had to get really clever, not competing on bids alone. We also had to identify and capitalise on market gaps.

The other challenge was competing on price. The major competitors had mature marketing systems and refined processes. They were volume providers, and knew that they could win on price. It was tantalising to try and compete in this same space, but again this would have been anti-RST’s brand mission and values. Ultimately the volume providers could not put out the same quality of service, over time. They were “churn and burn” providers, and we were playing the longer game. We had to appeal to an audience that was not merely price shoppers. 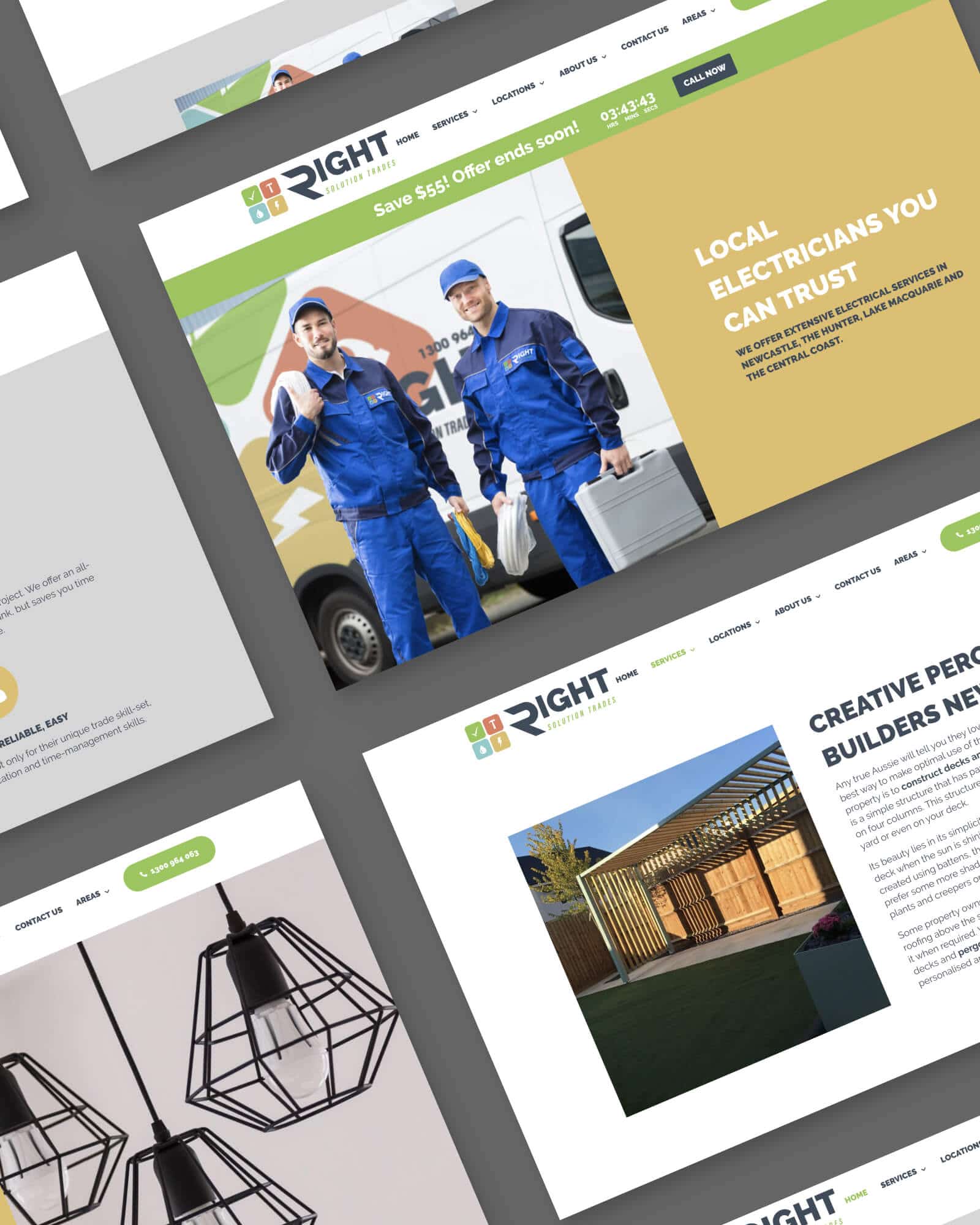 Quickly we saw an improved Return On Investment across paid channels (Google Ads), which was the first win, but slowly we began to see positive results coming in from our organic efforts too.

We are proud to say that after a full rebrand, including strategy, logo & visual identity, business stationery design, vehicle wrapping and an exhaustive SEO, Google Ads and Social Media campaign that the brand stands in a much healthier position. Our electrical campaign alone generated over 120 qualified leads a month, some small jobs but others major electrical fit-outs. This was just one wing of the business and we had similar success with a major renovations campaign we ran (a much higher-ticket service). Organically, the website went from ranking for very little, to performing well for a number of niche locations and keywords. Across the board, we saw a traffic increase of over 500%. These are the sorts of numbers you get when successfully marketing a brand where the online presence is close to non-existent to start with, and it’s a big win for an established business. It was an absolute pleasure to work with the team.